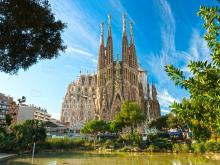 Barcelona is one of the most densely populated areas in Spain. Its electrical consumption is very high, but the demanded power and the electricity price vary a lot. In Catalonia the RES penetration is very high and there are lots of windfarms close to the city. A problem currently suffered by wind farms is the difficulty to enlarge the wind power installation, in most cases, due to the lack of electrical evacuation and consequently shutdowns happen. On the local consumption side, the Rambla del Celler sports center, located in Sant Cugat (20km from Barcelona city centre) is one of the city owned sports centres managed by the Eurofitness foundation. The Rambla del Celler is a sports centre with 6200 members which was involved in an on-going Horizon 2020 project (under grant agreement No 680556) “CHESS-SETUP". Several interesting energy saving measures will be implemented in this centre, including new monitoring equipment to enhance the existing energy management system. Smart tools will be developed on the specific site of high energy demand, in order to carry out Demand Response optimisation. Alongside, additional storage solutions (thermal) or (electrical) the use of distributed Li-Ion batteries will be addressed along with the analysis of the capability of distributed end-user energy storage facilities to help the grid penetration of RES. Such a solution can be replicated in any open public high energy consuming building.