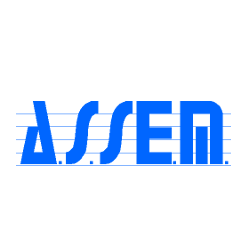 Azienda San Severino Marche SpA (ASSEM SPA) was founded by resolution of the City Council of San Severino Marche (a small city in the Italian Macerata province) of 29/3/1919 with the original task to produce and distribute electricity and to manage the public lighting service. By resolution of the City Council of 28/12/1994, ASSEM SPA was converted from a Municipal Company to a Special Company, acquiring legal status and assuming the characteristics of a body governed by public law. Subsequently, on 26/02/1996, the City Council entrusted ASSEM SPA also of the management of the water service, putting in place the foundations for the integrated management of the entire water cycle.
In 2000, also the distribution and sale services of natural gas in the area of San Severino Marche were assigned to ASSEM SPA and, through a new resolution of the City Council, ASSEM SPA was converted from Special Company to a joint-stock company. This action highlights the will of the municipality of San Severino Marche, which is currently the sole shareholder of ASSEM SPA, to make the company even more competitive, improving the quality of the services provided to the users with a positive impact on the community.
In 2009, the Company has been split into A.S.SE.M. PATRIMONIO S.r.l., holding the ownership of networks, buildings and power plants, and A.S.SE.M. SpA, having in charge the management of the gas and electricity networks and of the integrated water cycle service.

Role in InteGRIDy:
ASSEM SPA will be involved as Distributor System Operator (DSO) in all the project tasks regarding the grid improvement and its analysis, considering the previous experience of ASSEM SPA about smart grid development and the effort and the strategic importance of the topic for the company. The main roles will be the deployment of inteGRIDy framework at San Severino Marche pilot area, its monitoring and topology optimization. ASSEM SPA will be also involve in the overall evaluation , leading in particular the assessment of the inteGRIDy impact to the grid stability, flexibility and balancing.